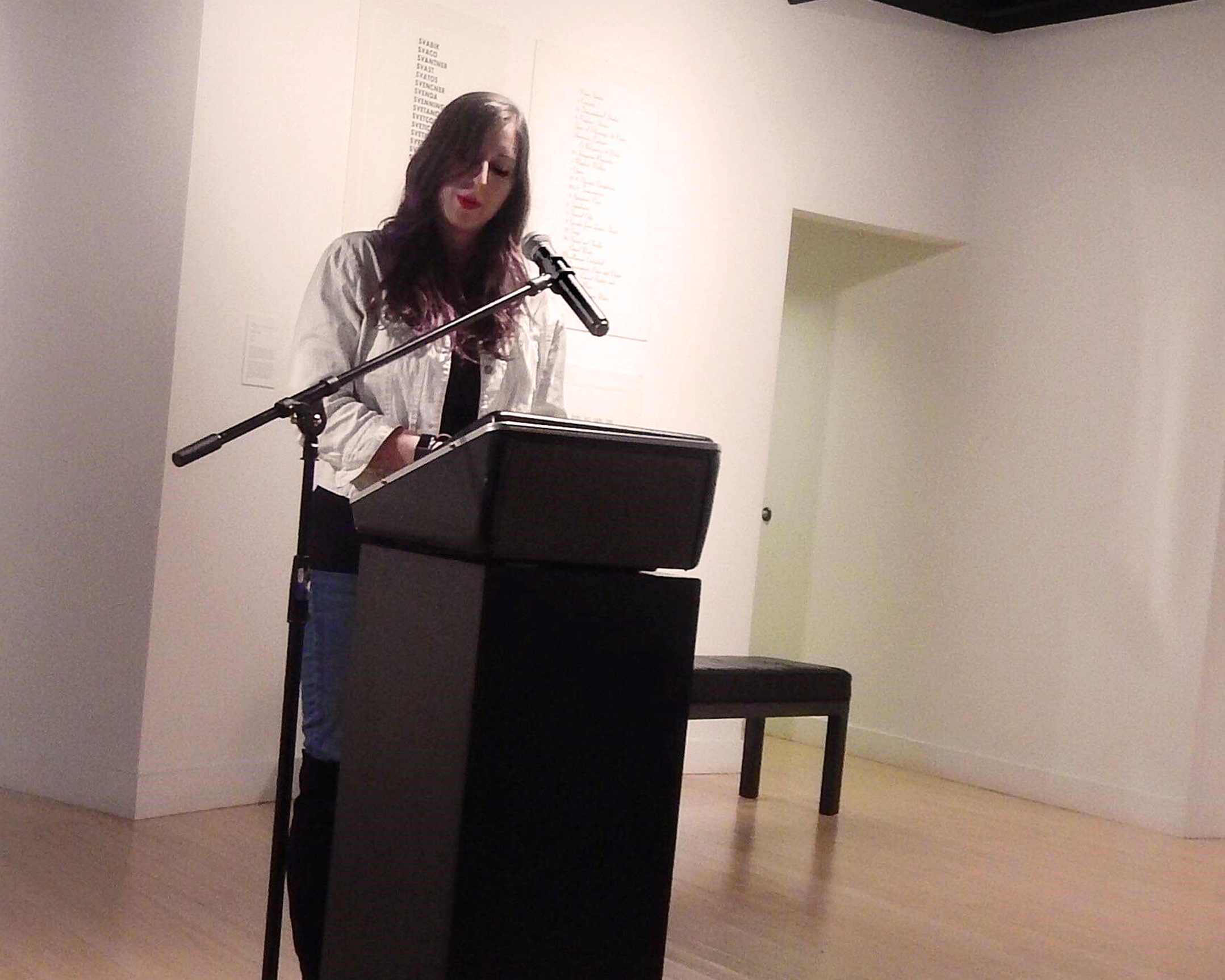 Last week, Lubeznik Center for the Arts in Michigan City, Indiana hosted “Give a Book for the Holidays” at their December First Friday event, which featured presentations and signings by authors Sara A. Noë, John Records Landecker, and Rebecca Sive. The speakers each brought a unique genre and story to the podium. Sive spoke about the importance of electing more women into legislative positions, while Landecker shared his updated autobiography after he was elected into the National Radio Hall of Fame last year.

Noë stepped up to the mic to discuss the challenges and pleasures of writing in the popular but widely misunderstood genres of fantasy, science fiction, and a unique genre that’s arisen from a blending of the two—science-fantasy, or sci-fan.

“What makes a really good fantasy story goes a lot deeper than the magic and the strange creatures,” Noë explained. “The great fantasy stories are still rooted in reality. You can imagine the most amazing fantasy world and yet not connect with a single reader if your plot and your characters aren’t grounded in a way the reader can relate to.”

Noë added, “Some of us are really good at transforming depression into super powers, or public speaking into dragons, or the loss of a loved one into a heroic quest of self-discovery.”

She followed with a reading from her new novel A Fallen Hero, which was released earlier this year and is currently available as a hardcover or paperback printed and distributed by Barnes & Noble. Noë’s last scheduled book signing of the year will be this Saturday, December 15th at the Co-op Shoppes in La Porte, Indiana from noon to 2pm.

Thank you so much for coming out and braving the cold to be here. My name is Sara Noë. I am the author of A Fallen Hero, which was just released in September, and it’s such an honor to be speaking to you today.

I’d like to dive right in and talk about the genre of my book. Let me just say writing science-fantasy is a lot of fun because I’m able to blend elements of fantasy and science fiction together. In the case of A Fallen Hero, I accomplished this by having spirits and creatures with supernatural abilities, and the humans in the story fight back by inventing technology to mimic the supernatural.

I’ve heard people say that science fiction and fantasy are limitless, and that’s why they enjoy those genres. You can do just about anything with magic. You can have talking animals and flying ships and castles in the clouds . . . the sky is the limit. You make the rules. That’s amazing. I mean, that’s really amazing! Anything can happen.

Except that’s not entirely true. And actually, what makes a really good fantasy story goes a lot deeper than the magic and the strange creatures. The great fantasy stories are still rooted in reality. You can imagine the most amazing fantasy world and yet not connect with a single reader if your plot and your characters aren’t grounded in a way the reader can relate to.

We as a society thrive on rules. We know the sky is blue, the ground is under us, and the sun sets every day. In fantasy, world-building is a critical part. You can make the sky purple if you want. Or red, or black, or it can change colors. But it has to be consistent. You can’t make the sky yellow every single day and then suddenly have it be red and none of the characters question it. That defies the physics of your world and undermines your authority as a storyteller. That detail seems like a mistake, and believe me, readers are on the hunt for discrepancies. What’s fun about fantasy is you get to set the rules, but then once you set them, you have to play by them.

There’s a lot of behind-the-scene work in fantasy. You don’t need to be a scientist, but you need to have a basic understanding of how something works in your story. You can have your people live inside an asteroid if you want. But how do they get oxygen? Do they need oxygen? What about water? How do they make sure their population stays in check? These are questions the author needs to address, even if those specific details never make it into the story.

To deepen the roots beyond world-building, readers want to relate to characters. As much as a lot of us probably want to receive a Hogwarts acceptance letter, we know that isn’t going to happen. But readers connected not just to the ideas of discovering magic and good triumphing over evil, but also personal connections, like escaping from a bad situation, and going to a new school, and forging friendships in place of broken familial ties. We didn’t just connect to the magic—we connected with the characters.

And this is where I particularly love this genre. Because it’s an open frontier stretching the limits of your imagination, but it’s still tied to real-world problems. I wrote about a character with supernatural abilities being hunted by the government. That’s not exactly a real-world problem in the broad context. But there’s more to the story than that. That same character is struggling to cope with the betrayal of the people he loved most. And trying to find his self-worth and his place in the world. And weighing the consequences of his choices when it comes to doing what’s right and doing what’s necessary to survive and protect the ones he loves. That is where we connect with him.

Dreams are your subconscious working through problems and challenges you’ve been facing. And for me, writing is my way of dreaming while I’m awake. My stories unfold like dreams, and in retrospect, I can look back and see how challenges in my life manifested abstractly in my writing. For example, I wrote my first fantasy novel when I was a high school student. The story featured a young woman from a small village, and she has to work up the courage to leave her home and her family and embark on a dangerous quest. I was preparing to leave home for college, and it was the first time I would really be away from home for long periods of time. I didn’t consciously sit down and tell myself, “Okay, I’m really stressed about college, so I’m going to channel that into a story.” That theme just emerged all on its own.

Writers are often given the advice to “write what you know.” I think in some ways, that can’t be helped. Your experience shines through all on its own. And some of us are really good at transforming depression into super powers, or public speaking into dragons, or the loss of a loved one into a heroic quest of self-discovery.

Writing isn’t just about entertaining; in many ways, it’s about coping. It’s therapy. Even if it’s subconscious like a dream, it lets us step back and look at life through different eyes. And readers find these connections because we’re all human, and we all face these issues, even if it’s a teenager battling depression in the form of a swordsman facing a wraith.

Fantasy has a truly unique perspective. 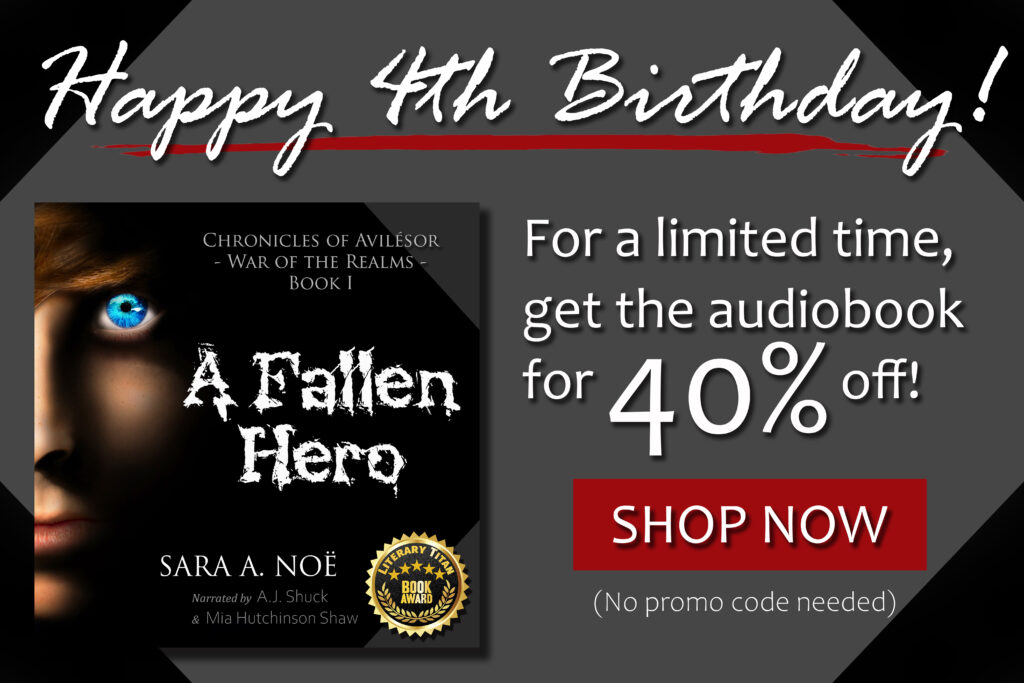