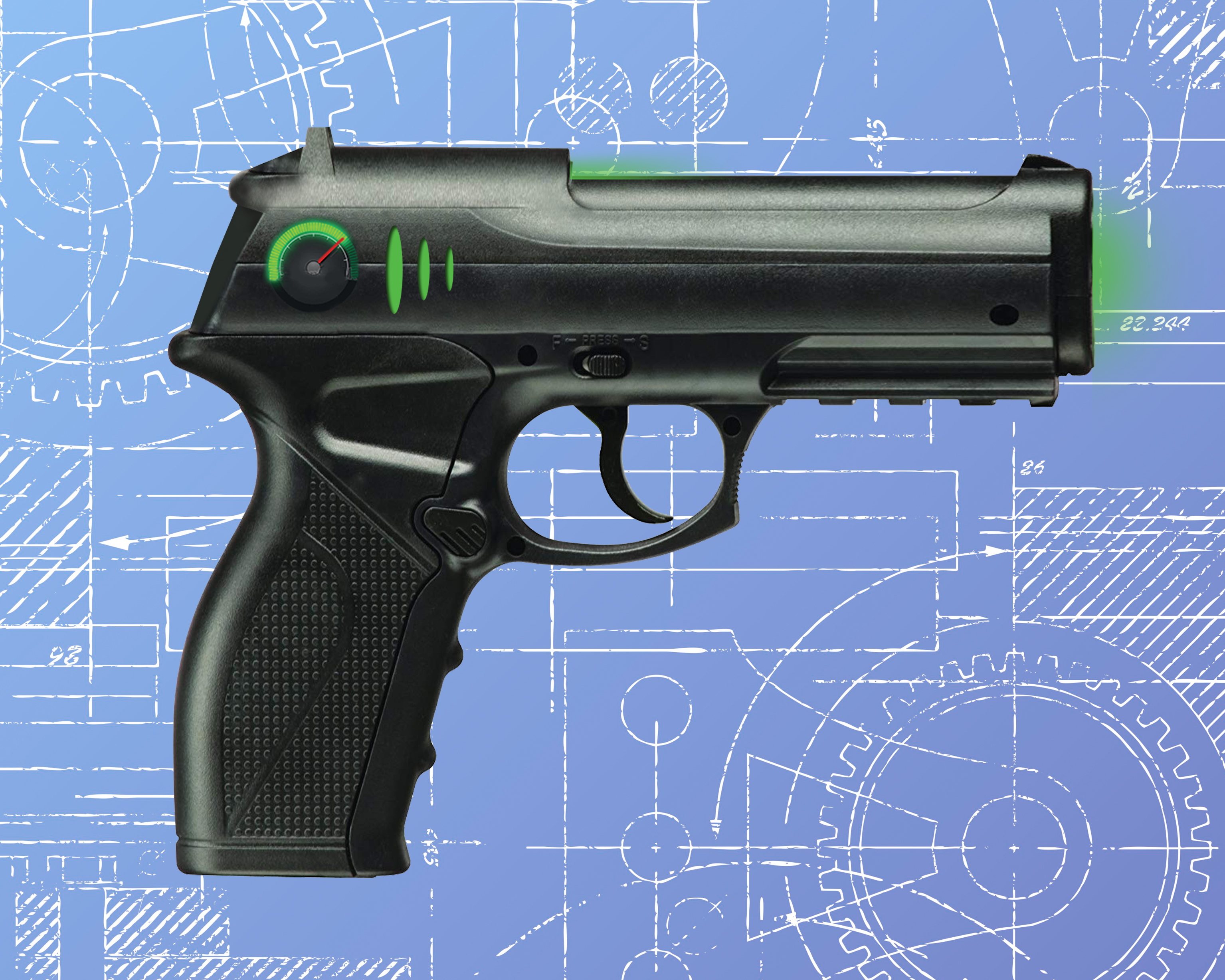 This is a post I wasn’t planning to write, but I’m pretty excited about it! Earlier this week, a fan emailed me and asked if I could provide additional details about the raid team’s ectoguns in A Fallen Hero. He pointed out that the AGC’s modified ectogun is described as being silver with a double-barrel, rather bulky design. But what do the original ectoguns carried by the Phantom Heights raiders look like?

I’ve done concept sketches and designs for a lot of symbols and creatures in the Chronicles of Avilésor series, but I’m not very familiar with guns — I’ve fired one only once in my life — and intentionally left the description rather vague, focusing more on what the gun sounds like as it charges and fires and what it feels like when it recoils in someone’s hand. I’d envisioned the ectogun as having a similar build to a modern day pistol, but beyond that skeletal description, anything was fair game. AFH introduced so many characters and world-building elements that I didn’t have spare pages to break the pace of the story with unnecessarily elaborate details, such as the inner workings of an ectoplasm gun.

So, following the fan’s request needed to potentially build a cosplay prop, I opened Photoshop and started designing Madison’s ectogun.

I refer to the weapon as “Madison’s ectogun” because Madison Tarrow was the first to successfully create a working prototype and then eventually replicate it to arm the raiders of Phantom Heights. She patented the design but sold her research to the AGC for further development, although the real credit for the ectogun actually goes to her late husband, who worked out the concept on paper but unfortunately passed away before he was able to see it brought to life. The entoplasm shield surrounding City Hall is another one of his unfinished projects that she completed by using his notes.

On its exterior, an ectogun has many of the same components you’ll see on a regular handgun — a rear and front sight, trigger with a trigger guard, safety switch, and grip. However, instead of a magazine, you’ll find a core of condensed ectoplasm contained in a removable capsule. Eventually, the core will burn out, but depending on the frequency of use, it can potentially last years before needing to be replaced. This makes Madison’s ectogun extremely useful in the post-apocalyptic setting where ammo is limited and charging a weapon between uses is inconvenient. On a side note in regards to the novel, Madison has not had access to the resources needed to replenish depleted cores with ectoplasm, which means the raiders’ weapons have been in heavy use for almost two years and are likely to start failing soon.

The chamber holding the ectoplasmic core is well fortified to prevent the capsule from rupturing if the weapon is dropped or suffers exterior damage. Breaking the core would cause a small explosion, so changing it requires great care.

The three clear windows on the side of the gun should emit a healthy glow from the power source. Their function is to show how strong the core is; if it’s dimly glowing or not glowing at all, the ectoplasm has been spent, and the core needs to be replaced.

When an ectogun is fired, there’s a delay of 1-2 seconds before the actual shot. You’ll hear a charging whine, and the needle on the gauge will move to show the level of power being drawn to the back of the barrel before the weapon discharges. Ectoplasm gives off considerable heat, so the vent at the top of the gun helps to prevent the weapon from overheating. It will give off a glow, but no ectoplasm will come out. It’s important to keep this vent clear of debris.

The ectoplasm will be shot at a high speed from the muzzle. Ectogun technology is still in a relatively early phase, and Madison’s design fires green ectoplasm at Level 1, neutral Grade D. A direct hit would feel like being struck by a baseball at a fairly low speed. It would leave a bruise and a minor burn, and it might knock someone down, but it wouldn’t cause too much damage.

In Project Zeta, an updated ectogun model fires red ectoplasm at Level 2C, which is more concentrated and packs a more potent punch. Keeping in mind that ectoplasm produced by ghosts can reach a natural state of Level 5A, there is still considerable room for growth as future models of ectoguns are developed. The Zeta gun has a larger frame with two barrels. It holds a smaller ectoplasmic core and a magazine clip, making it capable of firing both ectoplasm and bullets. Although its ectoplasm is a higher level and grade, its core is smaller and burns through the power source much quicker, so it has a much shorter life span per core and has to be changed frequently.

The color of ectoplasm does not indicate the potency. Color is based on the original source from which the ectoplasm was harvested and usually reflects a ghost’s Divinity; Madison’s original source was green (hence the green entoplasm shield as well), and the Zeta technicians charged their cores with a red source.

Why use an ectogun at all? As explained in the novel, all ghosts have the ability to become intangible at will, making bullets largely ineffective except in surprise attacks. There are only two known things capable of affecting an intangible ghost — ectoplasm and vidon, which is the webbing spun by giant, kálos-eating spiders that dwell in the Ghost Realm. Madison’s invention allows ghost hunters to hit even intangible opponents, leaving an opening to fire bullets for the kill shot. The AGC’s newest model does not allow a bullet to be fired at the same time as an ectoplasm blast, but with the shots coming from the same weapon and the convenience of being able to quickly switch rounds without having to switch guns, it’s an evolutionary milestone in ectogun design.

There you have it! A behind-the-scenes look at the ectoguns used in A Fallen Hero. Get ready for new ghost-hunting gadgets in Phantom’s Mask, coming next year!

I love receiving questions from fans! Please feel free to ask in the comments here on the blog, shoot me an email or DM, or post it in the “Ask the Author” section on Goodreads.

Update: Check out the finished product created by Ken “Bring It To Life” on YouTube: