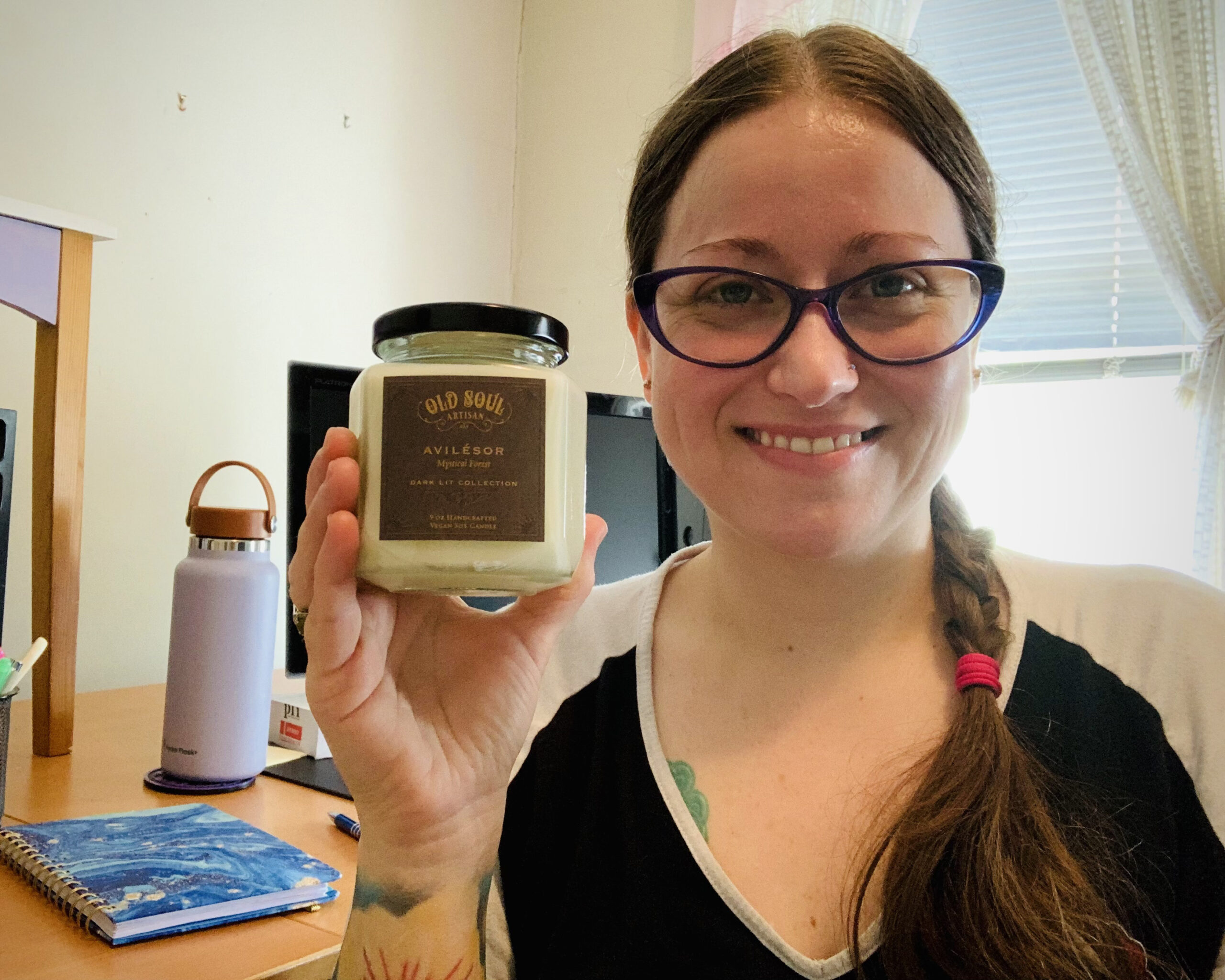 In 2020, I had the amazing opportunity to partner with Harmony Todd from Old Soul Artisan to collaborate on a literary candle for my science fiction fantasy series, Chronicles of Avilesor: War of the Realms.

Over a year later — after the trials of the COVID pandemic, the release of Book II: Phantom’s Mask, and both novels in the series receiving the Literary Titan Gold Book Award — we touched base for a Q&A interview and behind-the-scenes insight into the creation of the Avilésor: Mystical Forest candle.

“Old Soul Artisan creates literary candles inspired by folklore, fairy tales, and the dark psyche. Every candle tells a story. Each scent is inspired by a literary character or folkloric theme. In collaboration with author Sara A. Noë, we developed a fragrance companion to the Chronicles of Avilésor series.“

What inspired you to become a candlesmith and entrepreneur?

Being an entrepreneur wasn’t something I ever imagined until it fell into my lap.

After college, I was feeling conflicted over career decisions so I returned to some old hobbies to get my mind off things for a while. Making candles was one of those hobbies that I had taken up a few years prior but never really had the time to do.

I enjoyed the revived hobby so much that I rented a booth at the local farmers market to sell my soy candles. People liked them, I developed more scents, and eventually a business was born.

Being a business owner means I have full creative control. I didn’t realize how stifled I was feeling with my previous jobs until I had this freedom.

What were some of the greatest challenges you faced when you started your business?

I had no idea how much more work was required to run a candle company beyond just making candles. I needed to figure out sourcing the best quality materials at the best prices, bookkeeping, taxes, branding, marketing, maneuvering various online sales platforms, shipping orders, etc.

I don’t think challenges ever go away when you run a business, but over time you learn how to react to them — calmly and being able to accept the fact that sometimes you do need to ask someone for help.

Why did you decide to regularly donate some of the proceeds from your business to wolf conservation?

Environmental conservation has always been important to me, and I think it’s imperative to raise awareness to issues facing animals and their habitats.

If I were a millionaire, I could donate to every cause I was interested in, but I realized that I would have a greater impact by narrowing my focus.

A few years ago, I saw a video called “How Wolves Change Rivers.” I’ve always thought wolves were beautiful animals, and this video inspired me to learn more about wolf conservation efforts.

I visited several wolf sanctuaries in PA, NJ, and NY that rescue wolves in need and also participate in programs to breed endangered wolf species with the purpose of releasing them back into their native environments.

It makes me feel good that my business is able to contribute to these efforts.

How did you come up with the fragrance combination for the Avilésor literary candle?

Scent development for this candle was a fun process. Sara wanted a scent inspired by the ghost realm in the Chronicles of Avilésor series, a scent reminiscent of a mystical forest. I read A Fallen Hero to immerse myself into the world Sara created and began daydreaming about what a mystical forest would smell like.

Taking the list of potential ideas, I began testing oil blends for the literary candle. Eventually I found a fragrance that matched my daydream.

In my imagination, a sacred forest in a fantasy world smells like earthy cedar, crisp apples, and a hint of flowers on the breeze. I liked the addition of chrysanthemum because it has a subtle floral fragrance that compliments the woody notes of the scent and tones down the fruity apple. This mystical forest scented candle has received fantastic reviews.

Why did you decide to focus on literary candles and center your business specifically around books, poetry, folklore, fairy tales, and literature themes?

Story telling is fundamental to being human. Similar story themes pop up in cultures around the world, and I truly believe this comes from a well of human consciousness.

Darker story themes have always resonated with me. My favorite character was always the evil queen or villain of a tale. I’m not sure what that says about me as a child, but I can now say it is due to an interest in exploring the Jungian concept of personality duality.

Folklore and mythology usually have characters on the sliding scale between good and evil. It’s an interesting topic and it gives me a lot of room for creative exploration through fragrance.

What was the inspiration for the raven wax seal on the lid of your literary candles?

Ravens are carrions that are frequently represented in stories as bringers of prophecy or omens of death.

Specifically, I was inspired by the battle goddess of Celtic mythology, the Morrigan. The Morrigan is a triple goddess who appears in different forms and can also shapeshift into a raven/crow.

What advice do you have for young female entrepreneurs?

Perseverance and self-motivation are key to success.

Set goals that are realistic and be patient with yourself if it takes longer to achieve them than you had initially expected. You will learn a lot about yourself when you are self-employed. It is normal for your goals to change over time — mine certainly did.

Everybody faces challenges. Take a deep breath and work on finding creative solutions to them. Go with the flow and enjoy the journey.

Don’t forget to visit Harmony’s website and read her interview with me! We talked about creating the Chronicles of Avilésor series, writing challenges, art and photography, and more!

Psst… CoA fans can shop the Avilésor candle and take 15% off their purchase with the promo code PHANTOM!

All online purchases of the Avilésor candle support a USA small business, an indie author, and wolf conservation efforts. 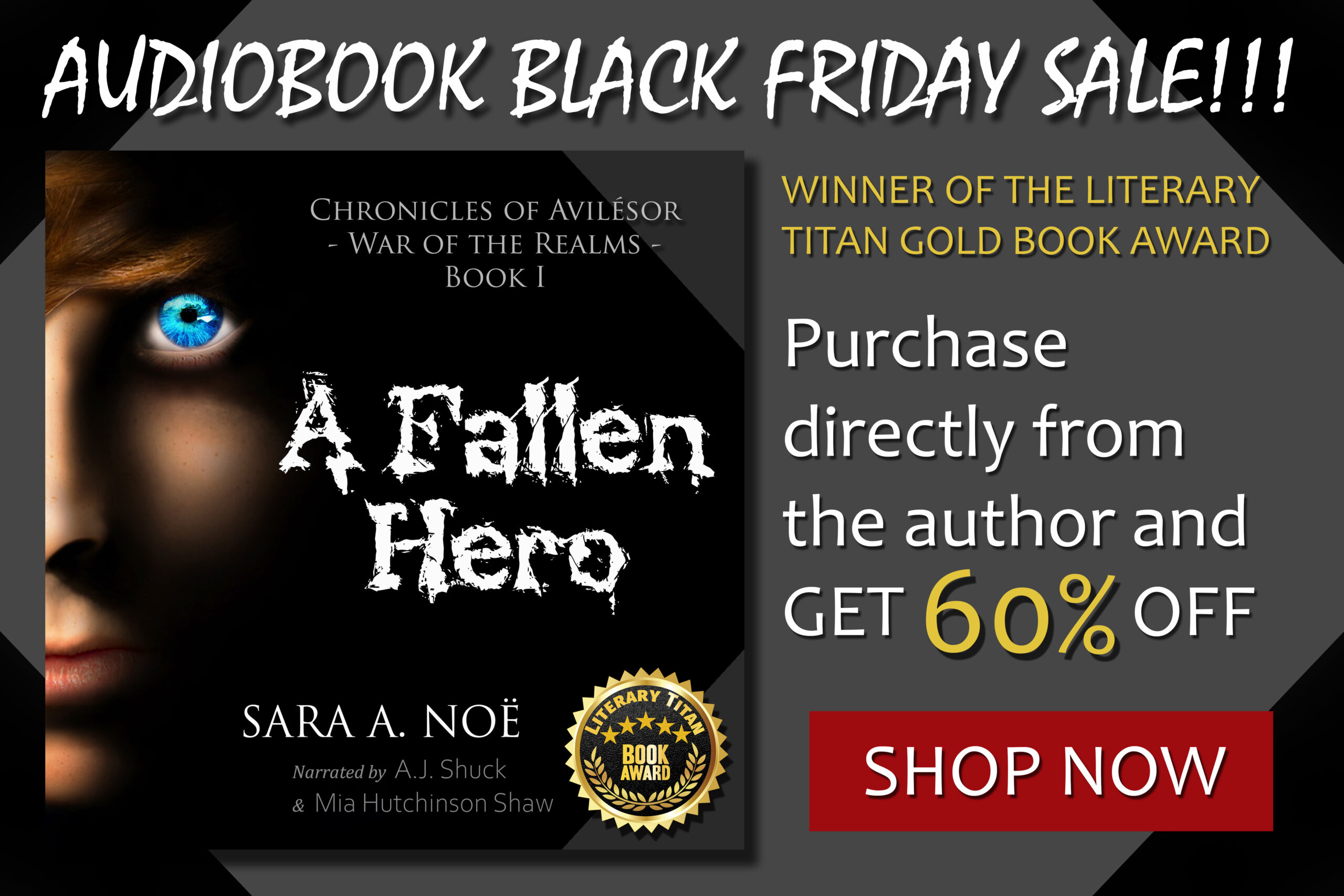