When fans ask me who my favorite character is in the War of the Realms series, my answer is a tie between Finn, Reese, and Axel. They’re such psychologically complex characters, and I absolutely love trying to decipher their minds and think about how they would react in situations.

But people seem surprised by that answer and say, “Why isn’t Cato your favorite character since he’s the protagonist?”

Well, the truth is, Cato and I have a complicated relationship.

Cato’s earliest conception, before the first word of his story was ever typed, was heavily influenced by a cartoon I loved when I was young. The idea of having ghostly and supernatural powers fascinated me, and I often pondered what that kind of world would look like when I was bored and letting my mind wander. I thought, what if all the stories about spirits and mythological beasts were actually true, at least in part? Maybe we got some parts wrong in all the retellings. But what if those beings had been here a long time ago? What if they still exist, just not in this world anymore? I pulled religious concepts, fairy tales, paranormal superstitions, mythology, magic, and natural phenomena into my own fantasy world where the spiritual and physical could coexist.

If you’ve read the War of the Realms series, you’re probably thinking to yourself that Cato doesn’t strike you as a quirky cartoon character. He’s not. He was never intended to be, and I don’t think that medium would ever suit him, despite the original inspiration.

I knew the story I wanted to tell would appeal to an older YA audience, so despite the rather innocent primordial roots from which Cato had been conceptualized, I took him into a place of darkness, violence, and torture, both physically and mentally. I tasked Cato with the same quest I was struggling with at the time—find where you belong in the world and discover what it is you were meant to be.

As Cato continued to evolve into his own entity, there was a point in time when I sat down with a list of the Divinities I’d created for the kálos race of Avilésor. Cato already had his two divine powers incorporated into the story, but it was still early in the first draft, and I wanted to change his sonokinesis to a different Divinity to pull him further away from his roots.

But I couldn’t bring myself to do it.

As I stared at the list of supernatural abilities to choose from, I came to the startling and rather sobering realization that Cato had inadvertently become the perfect representation of my depression when I was writing his story.

I wrote most of the series while I was in college, although A Fallen Hero wasn’t published until 2018, three years after I graduated. During my college years, I struggled with depression and denial of said depression. I didn’t seek any help or talk about it to anyone with the exception of my pen pal at the time. I kept telling myself that my frustration and sadness stemmed solely from pursuing a college degree I knew wasn’t going to satisfy me; I was convinced that my dissatisfaction was purely situational, and once I found my true path, I would find happiness. But it wasn’t until completing my internship and entering my senior year that I was able to look back and acknowledge that yes, in hindsight, I had been depressed.

Some days, I was exhausted to the point of lethargy. It didn’t help that I would stay up until 2, 3, sometimes 4 a.m. writing the War of the Realms series, only to be at the office by 8. I would come home, take a long nap, make dinner, shower, and then write and write and write, as if my brain somehow reasoned that delaying going to bed would delay the alarm clock and the grueling schedule of the day. I would recover on weekends, when I would sleep into the afternoon. It was an unhealthy cycle, but I didn’t know how to break it.

On those days, I had no energy. I didn’t feel sad, really; I didn’t feel much of anything. Just exhausted and empty. I didn’t want to go anywhere. I just wanted to sleep and let the numbing cold consume me. This form of depression was, in essence, my cryokinesis.

On other days, I suffered from anxiety attacks. My heart would start racing, and I couldn’t seem to catch my breath. My chest would be tight. My hands would shake. These attacks resulted in a compulsive urge to scream—not exactly an appropriate response in the middle of an office. Singing to loud music at the top of my lungs in my car on my way home from work helped. On the worst days, I took to running in the evening if I still had a scream itching my lungs by the time I made it home. I ran until I was out of breath, and that seemed to quiet the immense pressure inside. I even went for a run one particularly stressful day on my lunch break; I slipped off my sandals and sprinted barefoot around the block in my slacks and blouse to drive the scream out of my lungs. This form of depression was, in essence, my sonokinesis. And just like Cato, I wasn’t allowed to scream, although our consequences for doing so were very different.

Cryokinesis and sonokinesis. There were no other Divinities on my list that so perfectly matched the exact demons I was fighting in my real life. And so, they stayed.

I owe a lot to Cato. He was my therapy. I poured my darkness into him so it would leave my own mind. I sent him on a long, difficult, painful journey to find himself in the hopes that I would find myself, too. But I think this is why I can’t say that he is my favorite character; I put too much of myself in him. Facing Cato is like looking in a mirror at my past self in one of the darkest, most confusing times of my life.

Don’t get me wrong—I still like him as a character, of course! I couldn’t have taken him this far otherwise. But when it comes to my favorites, I enjoy the challenge of unraveling the darkness in Axel and the twins, as they have different demons than the ones I’m used to battling.

Which character(s) did you connect with in the books?

P.S. If you noticed that the featured image looks very similar to Phantom’s mask… that’s because it is! It wasn’t just an image I found in a Google search; I had purchased the mask several years before A Fallen Hero was published. In fact, the image of Phantom on the back of Book II was Photoshopped from an image of me wearing the mask and taking a self portrait. The saturation was toned down to give the blue fabric more of a grayish appearance, so the version I’m wearing on the right is a more accurate view of the true color. 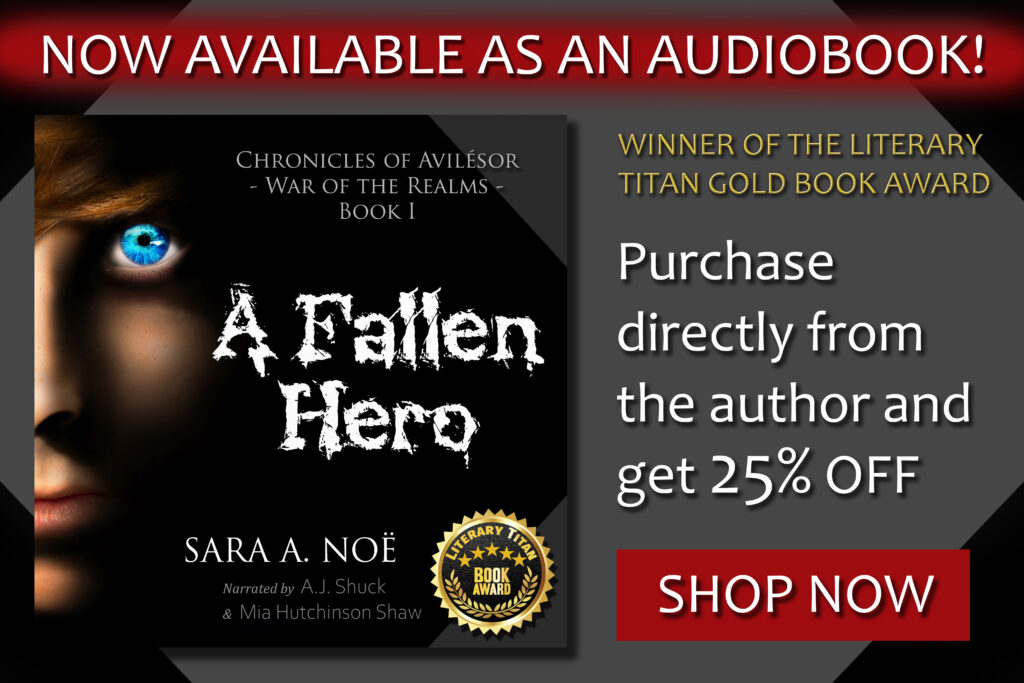