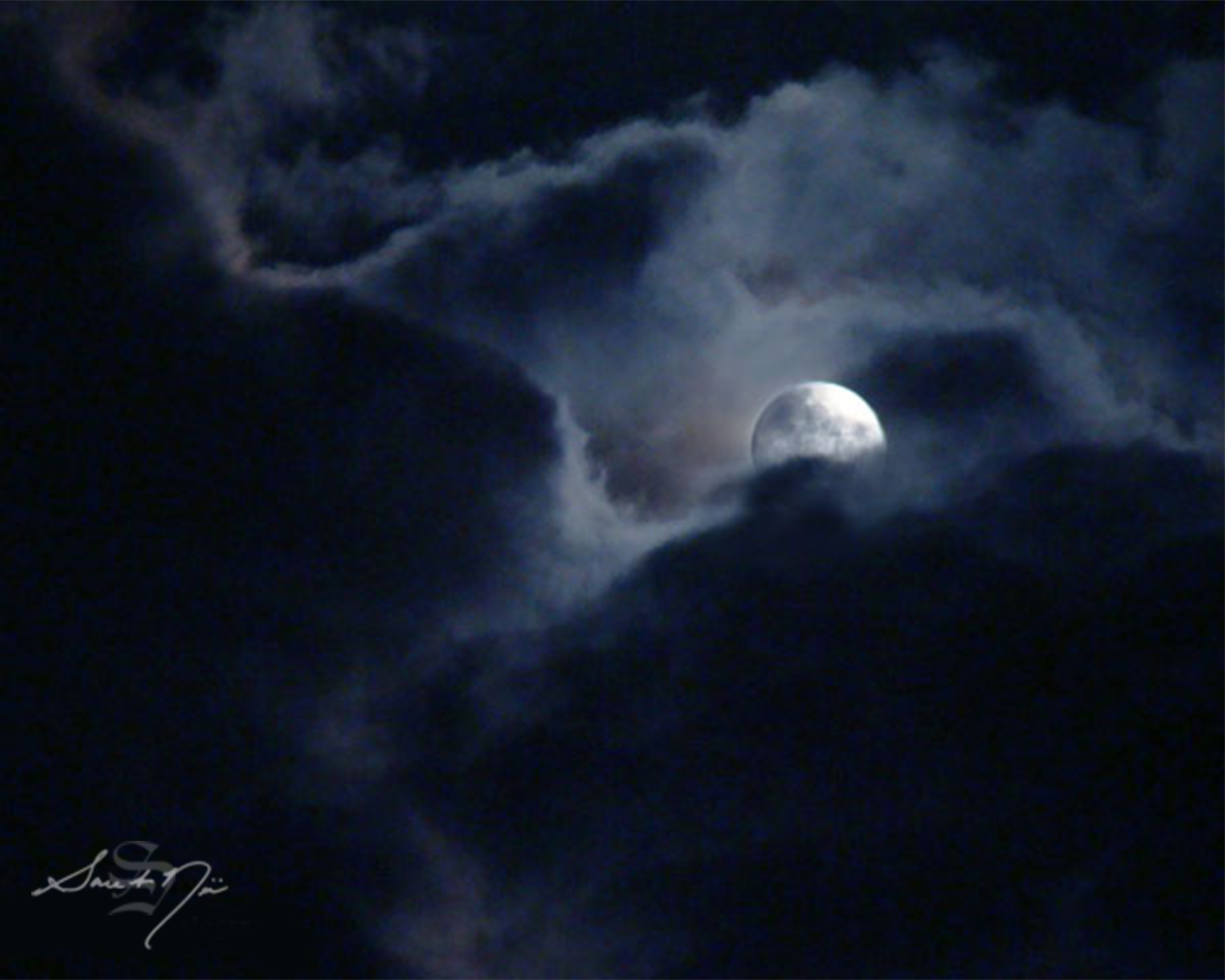 Tonight, a blue Hunter’s Moon falls on the night of Samhain and All Hallows’ Eve, and according to Wesly Cooper, there’s going to be “lots of weirdness in this Realm.”

He stared out the windshield at the shimmering surface of a mirage on the road ahead, then sat up straighter. “Wes, is that . . . ?”

Sure enough, it was already vanishing as they zoomed toward it. “Do you know what they are? Madison told me ‘portal’ isn’t really the right word.”

“It’s not. ‘Tear’ couldn’t be more accurate. Don’t think of the barrier between Realms as a wall; it’s more of a curtain. And curtains wear thin in places. Tears come and go because the curtain seems to be able to mend itself. Moonlight has an adverse effect on the curtain; it’s thinner when the moon is full. It also seems to consistently demonstrate an annual cycle, thickest in the spring and almost veil-like come fall. Combine that with a full October moon? There’s a reason that’s such a spooky month. Lots of Tears, and lots of weirdness in this Realm.” They drove over the spot where the mirage had been. Trey looked in the rearview mirror to peer back at where the “curtain” had temporarily been torn.

A Fallen Hero | Book I of the Chronicles of Avilésor: War of the Realms

October is known as “Otomus” in Avilésor, the Ghost Realm. But the barrier separating the Human Realm from the Ghost Realm isn’t the only one that wears thin during this time. Others, including the Spirit, Mirror, Nether, and Astral Realms, are also affected by the light of a full moon during the seasonal shift. What does that mean for humans like us?

The living are unable to exist in the Spirit and Nether Realms, and only a select few have the ability navigate the Mirror and Astral Realms. But the dead, especially during a full Otomus moon, are able to easily traverse between the various Realms, as are other types of spirits, both malevolent and benevolent.

Many kálos in Avilésor believe the Spirit Realm is divided into two tiers: Afterlife and Beyond. Afterlife is what we might call limbo—a transitional plane between life and final death. In Afterlife, a soul maintains its memories and sense of self it had during its lifetime. This is where loved ones reunite and wait for other friends and family to join them. It’s common for ancestors to watch over their living descendants and protect them from the evil spirits that flit between the various Realms. They can, to a limited extent, interact with the living via the Mirror, Nether, and Astral Realms, occasionally even able to influence objects or briefly appear in the mortal worlds. But not everyone has strong familial ties or any interest in maintaining a presence among the living; some souls choose to pass straight through Afterlife and enter Beyond. Others join their ancestors and act as protectors and guides for a while, but many then choose to move on after the last living person to remember them has died and their memories are no longer carried in the mortal worlds. Some are never ready to venture into the mysterious Beyond, whether it be out of fear, rage, or inability to accept death, and they will dwell forever in Afterlife.

Here is where kálos religion deviates into separate factions. Afterlife’s existence has been proven thanks to the existence of Necromancers, Mediums, moorlins (souls of the dead), and fay (other spirits). But Beyond is a mystery. Some believe that once a soul leaves Afterlife, it is reincarnated into a new body to continue the cycle of life and death. Others believe that Beyond is a state of enlightenment beyond our comprehension where souls forgo their memories and earthly ties and join the flux of energy flowing through the universe. And some believe both paths are possible but the soul has the option to choose which way to go—back to the mortal Realms in the form of reincarnation, or forward to the ultimate pure form of harmonious existence.

Tonight and during the next few days, various Cröendorian religious and spiritual ceremonies acknowledge the thinning veil that separates the Realms and use this time to honor the dead. In Avilésor, it’s common practice to light candles, gather around bonfires, and give thanks to the ancestors who guide and protect the family. The dead are able to more easily communicate with the living. You might catch a glimpse of a reflection in a mirror, or notice the movement of a shadow that should be still.

But for us, spirits aren’t all that we should be wary of. Avilésor is home to many unique creatures, including beasts from mythologies and legends as well as animals that have gone extinct from our Realm, such as sabertooth tigers. And, more importantly, the kálos themselves, who harbor a great disdain for humans and often take pleasure in frightening, hunting, and tormenting us when they venture into our Realm.

Beware. Don’t trust the shadows or mirrors. And don’t forget . . . the luni hunt under the full moon.

On the Cobblestone Road © 2016 by Sara A. Noë. As an Amazon Associate and collaborator with Old Soul Artisan, the author earns commission from qualifying purchases. All Teespring merchandise advertised on this website is the author's own design, and she earns profits from each sale.