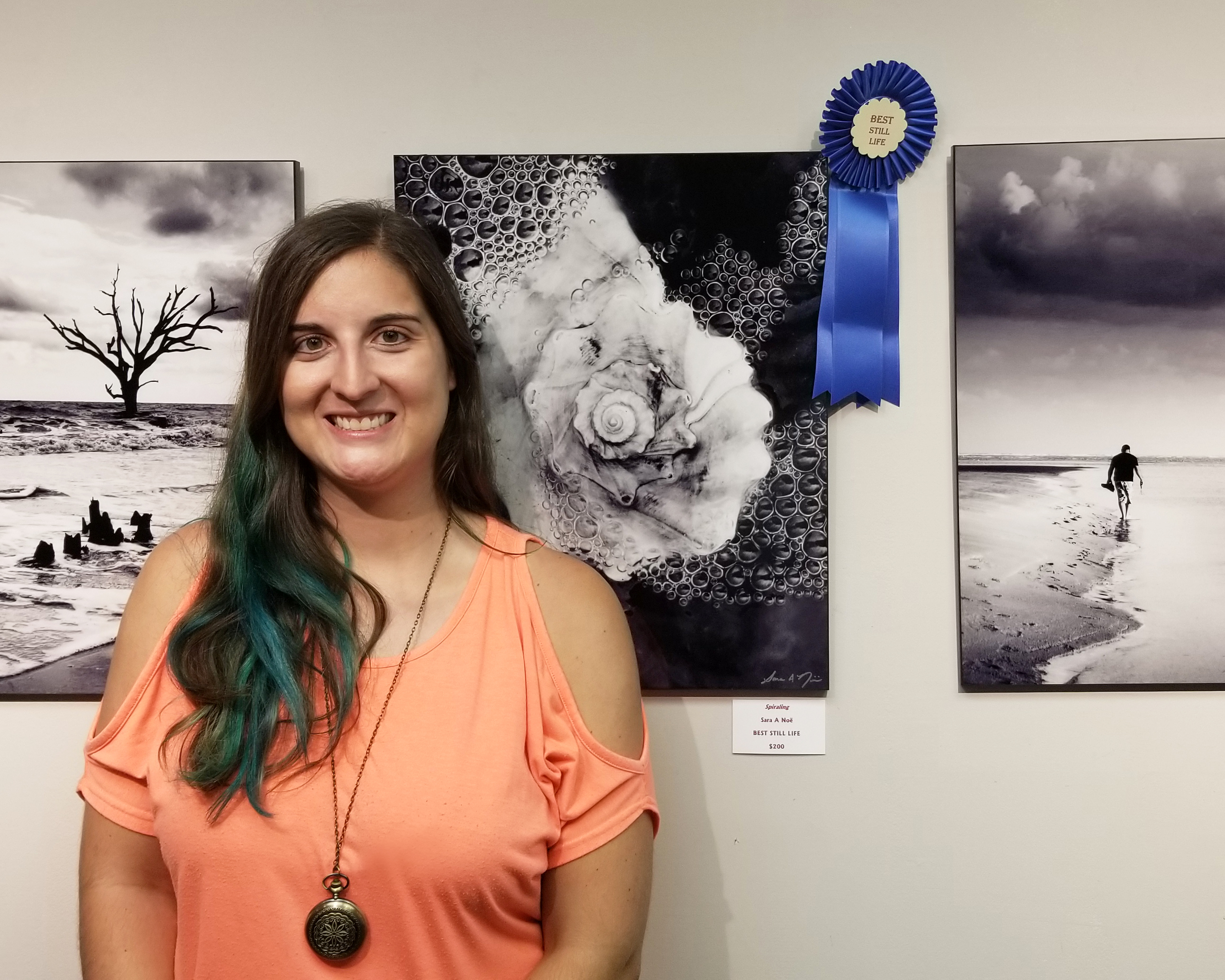 On September 6th at Southern Shore Art Gallery‘s First Friday opening reception, I had the honor of showcasing three of my photographs in my first ever gallery exhibit. While considering which pieces I wanted to submit, I decided that I wanted to ensure my three pieces stood together as a unified series amongst the variety of other photographs on display, so I selected and cropped black-and-white photos taken in South Carolina in 2017. The 16 x 20 photos were all printed on wood panels with a glossy enamel finish.

You may have recognized “Aftermath,” which was previously featured last year on the cover of Voices literary journal published by Lubeznik Center for the Arts. This photograph was taken on Edisto Island in a place many call “the boneyard beach.” This beautiful spot, well off the beaten path for tourists, was a photographer’s dream.

“Spiraling” was also taken at the boneyard beach of Edisto Island. Shell collecting is not allowed at this beach, so when I found this gorgeous shell, the only way to keep it as a souvenir was to capture it in a photograph. I stuck the point of the shell in the sand and remain poised above it with camera in hand, clicking away as the waves came in and swirled around it. The timing had to be perfect to get the waves and bubbles around the edges without the water completely covering the top of the shell and blurring its features. This piece won “Best Still Life” in the exhibit and received a blue ribbon.

“Searching for Starfish” was captured on Kiawah Island. As the afternoon of a long day at the beach waned, my friend ventured along the shoreline to search for starfish while we waited to see the dolphins beach themselves at low tide. A rather ominous but photographic line of clouds passed by harmlessly in the distance, lending a dark, brooding mood in black and white.

The exhibition was juried by Trent Albert, a graduate of the American Academy of Art in Chicago and owner of Albert Photographic in Chesterton, IN. The exhibit will remain on display at Southern Shore Art Gallery through the end of September. All three pieces are for sale at the gallery. A heartfelt thank-you goes out to the friends and family who joined me for the reception and celebrated my unexpected award.