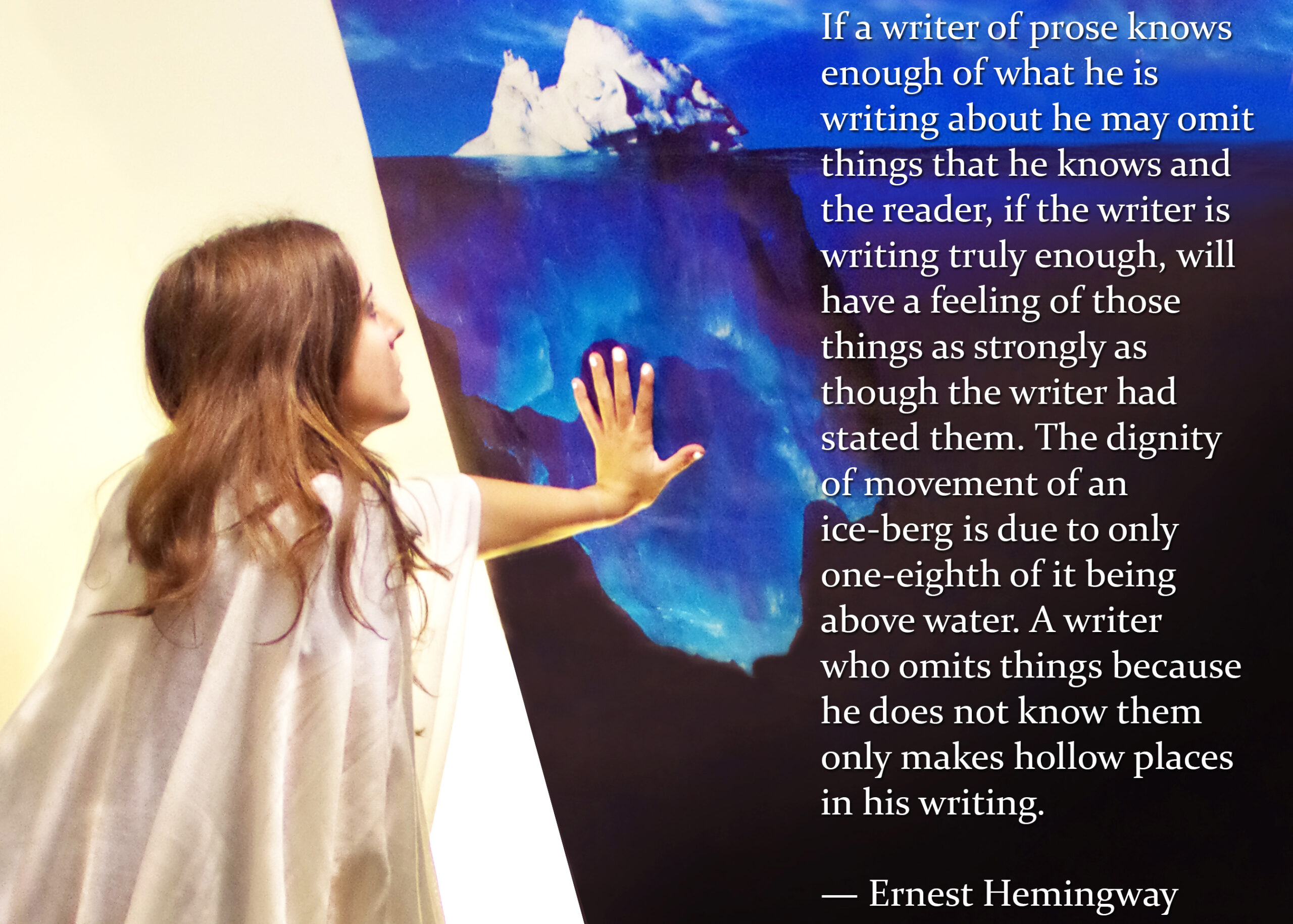 – Ernest Hemingway in Death in the Afternoon, 1932

Hemingway’s Iceberg Theory, also called the “theory of omission,” is a concept that has fascinated me as an author. What exactly is he talking about when he compares writing to an iceberg?

The general consensus is that Hemingway is discussing theme when he talks about the theory of omission. He had a minimalistic style and believed the deeper meaning of a story should shine through without being apparent on the surface.

In other words, what high-level ideas lurk in the iceberg beneath the superficial plot? What unspoken nightmares and desires drive the characters onward? In some ways, this is an extreme iteration of the “show, don’t tell” rule writers are encouraged to follow — a rule we should all be familiar with.

I don’t disagree with this analysis of the iceberg theory, but I like to think even deeper, past the overarching themes and metaphors and into the cellular realm — into the details. The paints in an author’s pallet.

I couldn’t agree more with Jenna. As an award-winning fantasy author, I would assert that the beauty and believability of worldbuilding is based on a complex network of details the reader is rarely privy to witnessing in its entirety.

The reader doesn’t need to know most of these rules as long as the writer consistently follows them. You are allowed to bend and break the laws of our universe, but your new universe must have its own laws to abide by.

I could deviate on a lengthy tangent into worldbuilding here, but I’ll digress for now with Hemingway’s assertion that omitting things because the writer does not know them creates hollow places in the writing. Rather, the writer should know the bones of their world and consciously decide which ones deserve to be fleshed out and which ones should support the structure from below.

Details are something I obsess over. If you ever catch me staring off into space (which happens rather frequently), I’m probably churning an idea around and around in my head until I’ve untangled the logic behind it and found a place to tuck it neatly into the files of my universe. I have a journal filled with notes, most of which have no place in the novel itself but allow me to better understand my characters and keep my details stable.

Mastering the iceberg theory is like crossing a chasm on a tightrope. As a novice writer, I had a compulsive tendency to justify every detail, cluttering the story with extraneous words while leaving almost nothing to the imagination of the reader.

My edits usually involved intensive surgery. I had to write everything, then go back and selectively remove pieces, which I replaced with hints, implications, and foreshadowing in place of outright explanations. Over time, as my experience grew and my writing skills improved, I became better about skipping the extra work and automatically writing without needing to make so many cuts.

I came to think of writing as a game; I was hiding clues for the attentive readers while skimmers could still grasp the story as a whole. For example, if you read the first novel in my Chronicles of Avilésor series, you’ll reach the end without thinking twice about tiny details such as a date on a penny or a name dropped in passing.

But if you finish the series and re-read the first book again, you’ll have “ah-ha!” moments when you realize those miniscule details that seemed so irrelevant at the time actually alluded to a future character, a backstory, or information about another world.

Those are the moments I strive to achieve in my readers — those instants where they connect the threads all on their own and the fictional universe they’ve been exploring suddenly becomes bigger.

One of the master fantasy worldbuilders to study is J.R.R. Tolkien, who created such in-depth and layered worlds that fans still study his invented languages and histories to this day. For those who are interested in only the surface story, his novels are well-balanced with enough details to develop the realm of Middle-Earth without overwhelming a reader. But for those who want more, Tolkien made the sub-level of his iceberg available to study and analyze.

(If you’re interested in the topic, read my analysis of Tolkien’s primary and secondary worlds.)

Challenges That Writers Face with the Theory of Omission

There’s an elegance to writing that manages to strike the ideal balance between just enough and not too many details. However, that balance is difficult to achieve, especially because:

1. The Burden to Fill in Gaps Falls on the Readers

Your audience plays a key role in the success or failure of the iceberg theory in your writing.

Some readers are ready to invest. They’re in a distraction-free environment and fully committed to getting immersed in the writing, and they have active imaginations.

But not all readers are able or even willing to enter that attentive state. Some readers are skimming through a few pages at a time in between errands and chores. They’re distracted and can’t focus enough to pick up on subtle allusions while real life keeps pulling their attention away.

Others simply aren’t interested in doing the work and connecting the points on their own. They want everything spelled out for a simple read that doesn’t require much extra thought.

Who are you writing for? How is that going to affect the degree of omission you as the writer can effectively get away with?

An example: I was receiving a critique of a short story vignette told in first person point-of-view. The narrator’s name was Sam, which could be either masculine or feminine. First person can be tricky since people don’t consciously think about themselves and how they look, so it feels unnatural to write a narrator who forces such thoughts and dialogue without a valid reason (such as admiring a new haircut or other change from their normal appearance).

My solution was to allude to Sam’s femininity with details about how she noticed her body sweating on a miserably hot and humid day. But despite the brief mention of Sam’s damp shirt sticking to her body and sweat tickling her skin as it trickled into her cleavage, half of my beta readers wasted most of the feedback session debating the narrator’s gender instead of focusing on the conflict.

All the technique and work in the actual story was overshadowed by that one inconsequential detail my readers seemed to be obsessed with. Was the narrator a girl or a boy? Sam’s gender didn’t have any impact whatsoever on the plot. She could have been male, female, transgender, nonbinary — it really didn’t matter. But my audience in the workshop was hung up on that single detail and couldn’t seem to get past it.

I leaned back in my chair feeling like I’d failed as a writer.

Naturally, I was defensive as I mulled over the feedback, and I instinctively put the blame squarely onto my readers for overlooking the careful subtlety in my work and focusing on the wrong aspect.

These were quick prompts presented in a workshop. For my style to be effective, I needed focused readers who had time to slow down or go back to reread if necessary. This context didn’t support subtle allusions.

While the burden to fill in the gaps and pick up sub-surface themes does fall on the readers, it’s up to the writer to know who they’re writing for and leave enough clues for them.

Writers are more than just people putting words on paper. They’re mapmakers, anthropologists, historians, linguists, psychologists, and more. But ultimately, they are translators tasked with the difficult goal of transferring information to readers. Writing is a curious magic that uses words to paint images and transmit voices into the mind of a reader.

Too many gaps in the translation causes confusion. Sometimes these are labeled as plot holes. Perhaps in the author’s mind, the many moving parts of a written world and the characters in it make perfect sense. But if those connections are too vague or missing altogether, readers become confused.

The human brain automatically seeks to fill in holes. With enough information, it can usually do this successfully. But with only a few pieces of the puzzle, readers can sometimes draw drastically different conclusions than the author intended.

Of course, each person interprets a story differently, so there will always be discrepancy and debate no matter how clearly the writer believes s/he has conveyed the scenes.

There’s a fine line between spelling out every aspect and being so discreet that information is completely overlooked.

I invite my fellow writers to stop and think about an iceberg. How much depth have you invested in your story, in your characters?

Your details are your scaffolding. You’re the one who decides which ones are critical enough to be presented on the surface and which are part of the supporting framework.

Omissions should be intentional, not negligent. Not “I don’t know — I didn’t take the time to flesh out the idea.” Take your iceberg in its entirety and submerge what does not need to be directly said until you have the proper proportion. Every crevice should still be accounted for whether it is above water or below.

You are a guide, but you also need to trust your reader — something I’ve struggled to do as I developed and tested my own style and techniques. I’m still frequently tempted to hold my reader’s hand and walk them through every intricacy I’ve fashioned in my world, but at the same time, I want to step back and let them find my hidden clues, play my game of hide-and-seek.

Love fantasy worldbuilding, found-family relationships, and page-turning adventures? Check out my award-winning Chronicles of Avilésor: War of the Realms series.