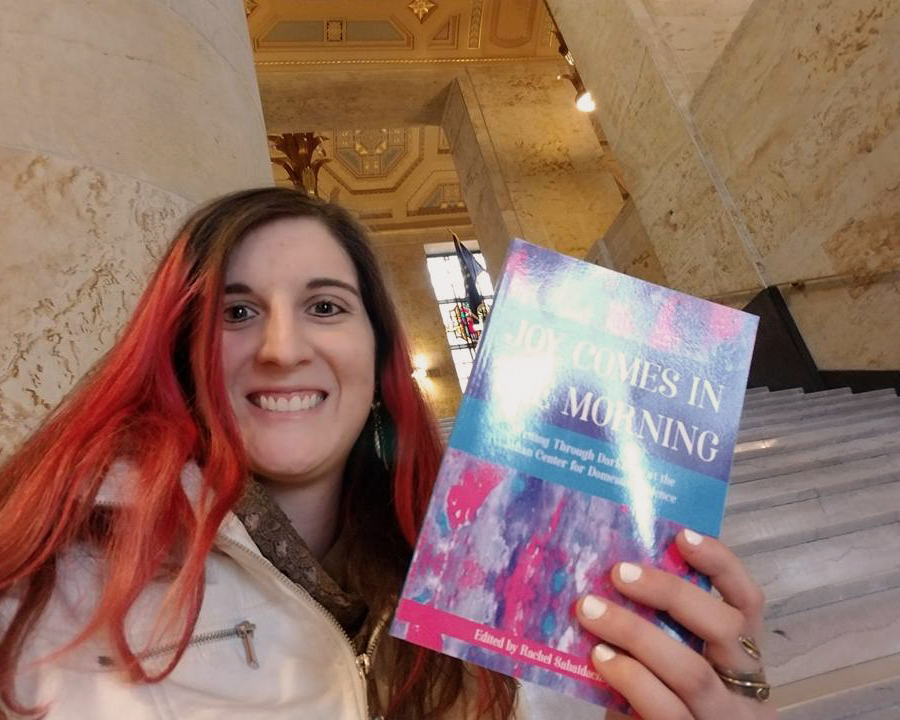 On Saturday, March 24, 2018, I stood on the snowy steps of the Indiana State Library in downtown Indianapolis. I was attending my second writing conference.

day at the end of March would instead bring a record-breaking snowstorm of ten inches? I joked that I’d brought the snow with me (La Porte had been buried under 106+ inches just from December to mid-January alone), but for Indy, this was the heaviest snowstorm in the last five years. I trotted up the steps, threw back my hood, and shook the snowflakes from my hair. The registration table was to my right, but my head was pulled up. The architecture and scale of the building took my breath away.

What brought me here was the selflessness generosity of a friend, mentor, and all

around amazing woman who, upon learning that the reason I wasn’t attending was tied to finances, mailed me a card with a donation inside and the instructions to “pay it forward.” And someday, I will.

The gathering was smaller than I expected, considering the location and the size of the venue, but at least thirty registered attendees never signed in, likely thanks to the weather and slick roads. As had been the case with the first conference I attended, the itinerary gave writers the option to select three of nine sessions.

My first session was about writing novels. The presenter, Angela Jackson-Brown, described her struggle to write a story with a Klansman as the protagonist. She had to get inside his head, and what a disturbing place that was, especially for a woman of color. She just couldn’t connect with her character. She mentioned her difficulty to a friend, who said, “You know my grandfather was in the Klan, right?” Which led to Angela meeting a former Klan member at a coffee shop for an interview. Her friend warned, “Ask him what you need to. But I remember him taking me to Dairy Queen as a kid, and being there for me when my dad wasn’t. Please don’t tell me the details. Don’t ruin my memory of my grandpa.”

Know your characters. Angela stressed this over and over. Know everything about them, even if those details don’t appear anywhere in the story. She had been trying to write from the perspective of a monster, but she realized she needed to find the real person underneath, the person with desires and fears, the human being with motives and purpose. It wasn’t a story about a Klansman. It had to be a story about the grandfather, who just so happened to be in the Klan. Otherwise, no reader would connect with the character.

“The reason we get writer’s block is
we don’t know our characters.”

Angela covered a wide range of topics like point of view, setting, and character development. Each chapter, she said, should end with a mini cliffhanger. Writers take great pleasure in making readers stay up all night. (I will attest to that statement!)

After lunch, my next session was “The Pleasures and Pitfalls of Writing Historical Fiction” by Barbara Shoup. I was hoping to learn tips for world-building. As a fantasy writer, I’ve done historical research for reference, but the beauty of fantasy is that history is an inspiration and doesn’t have to be accurate down to the tiniest detail. Historical fiction, Barbara explained, is written in a past time period in which the author has not experienced firsthand. It is “history bent to the imagination.” Nonfiction has an agenda, but the goal of fiction is to tell the story or experience from someone’s point of view without necessarily picking sides. Fiction, she said, is like looking through a keyhole at things that are none of your business. The conversations that weren’t supposed to be heard, the secrets that weren’t supposed to be unearthed—the story is more important than a catalog of details.

Barbara spoke of world-building like concentric circles. Start with the character. Know every detail. Then, that character’s world expands, but how big does it get? Does your character ever leave the house? The neighborhood? What details do you need to know for a character who never travels beyond his backyard versus one who travels across the world?

She left us with an interesting note. The human body is the human body. It always has been over the centuries we’ve been telling stories. We may think differently about our bodies now—think of medieval hygiene, our knowledge of how the body works, our view about race today and in the not-so-distant past—but the human body has not changed. Only our perception of our own bodies.

The final session I attended was an overview of flash fiction by Sean Lovelace. Flash fiction is a fairly recent genre that has gained popularity. It’s about 750 words. That’s not a lot of room for extravagant sentences, which means every word has to count. “Steal from poets,” Sean told us. They know how to use the white space and imply without saying.  This naturally made me think of Hemingway’s Iceberg Theory.

Most flash fiction is realism, as there just aren’t enough words for much world-building. Sean advised to worry about word count in the editing, not the writing. Plan later. Write now.

“The words of the last line should create a silence, a white space in which the reader breathes. The story enters that breath, and continues.”    —Jayne Anne Phillips

I didn’t forge any new writing connections at this conference like I did at my first one. I did enjoy spending the day immersing myself in the facets of the craft with two Sandcastle Writers, my instructor Jo (right), and Mary (left), a student who had moved away, making the conference a fun reunion. I couldn’t leave without adding a new book to my collection—Joy Comes in the Morning: Writing Through Darkness at the Julian Center for Domestic Violence. The book called to me. I think perhaps I might find dark secrets in the pages that might inspire the troubled pasts of my own characters whispering in my ear. Eventually, I think I’ll have a collection of books with a writing conference and date written on the inside cover. It’s becoming a tradition.